How to get to Malta

Get practical information on how to get to Malta. Which airlines fly to Malta? When is the cheapest time to fly to Malta?

How to get to Malta

Malta is one of the smallest countries in the world and, believe it or not, not all of the world population really knows where is Malta or how does one get to Malta. Malta is an island, so you can reach it via air as there are many companies flying to Malta, or via water from Italy with a Catamaran.

Before we take a closer look into the possible options of travelling to Malta, you might be interested to know the basic information about this country:

Even if many people think that Malta is part of Italy, actually Malta is a Republic.

Malta has connection flights with Sicily via air in 40 minutes flight thanks to the Maltese national airline, AirMalta and some low-cost airlines like RyanAir, EasyJet and other airlines. AirMalta, in particular, operates from various countries in Europe and if you do some research you will manage to find some really good prices.

By ferry, you can get to Malta from Sicily with a 2-hour ride which leaves early in the morning or late evening. Virtu Ferries operate the transit between the two islands and they have recently invested in a new boat (the one in the picture below). If you do decide to come to Malta by ferry, this carries with it an advantage, because, with some extra cash, you can come to Malta in the comfort of your own car. Check here the prices or the updated time schedule here.

Read also: How to get to Blue Lagoon 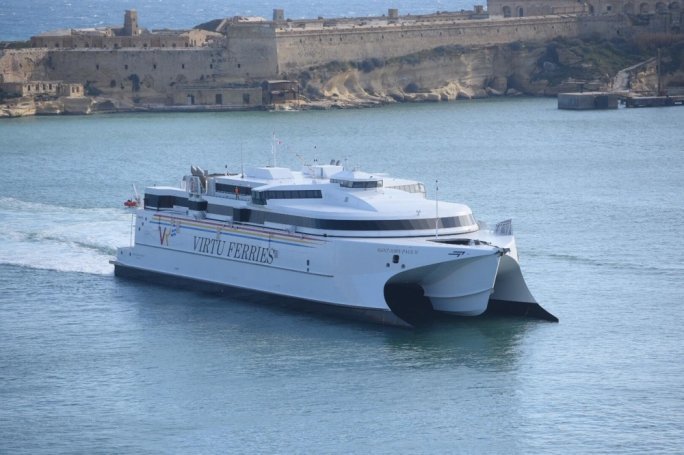 Malta has become a popular cruise ship destination, especially for Mediterranean journeys. Passengers who dock in Malta, in Valletta Grand Harbour, have the option to take shore trips that usually last a day. Cruise lines like MSC Grandiosa, MSC Magnifica, Spirit of Discovery, Boudicca, Marco Polo and Costa Pacifica stop in Malta. You can find the whole list of the cruises that dock in Malta on the Valletta Waterfront website.

Malta is situated just underneath Sicily and on top of North Africa. In the past, colonies would dub it as the real centre of the Mediterranean. And today, it still represents a hub for people from all across the two continents, Africa and Europe.

What is the cheapest way to get to Malta?

Europe is blessed with a couple of good low-cost airlines like RyanAir and EasyJet among others. So getting to Malta from practically any country in Europe can be really cheap. Just get the website and check the prices of these airlines as some time you can fly to Malta with just €9.

Read our full guides to Flights to Malta and How expensive is Malta.

The busiest season for Malta is summer. But the island is surrounded by tourists almost all year round. However, looking for flights from European destinations can get really cheap if you do the right homework. Direct flights from Rome or Madrid can be cheaper than 50 euros! So get digging and scan the websites as SkyScanner for the best prices for your holiday in Malta.