Where is Malta Located?

Malta is a set of islands located in the Mediterranean Sea on the continental platform between Sicily and North Africa. Known worldwide for its warm climate and beautiful landscapes, Malta is amongst the most popular tourist destinations in Europe. Some people think Malta is a city or a region in Europe, but it is actually a very interesting country rich in history and culture.

Where is Malta located on the Map

Malta is a set of islands, a European country, located between Sicily and Tunisia. Often confused to be an Italian island, in fact, Malta is a Republic.

Malta is composed by the 3 major islands, the island of Malta, the Island of Gozo and the island of Comino. There are other smaller islands such as Filfla, St. Paul Islands and Cominotto. Malta is one of the places that has a warmer climate than most of Europe. Indeed, the long summer season and relatively warm winter attract tourists here all year round.

The native people of Malta, Maltese, speak their own language, which is Maltese and has a very rich history. The country was first inhabited around 5900 BC and repopulated around 3850 BC by a civilization which at its peak built the Megalithic Temples, which today are amongst the oldest surviving buildings in the world. 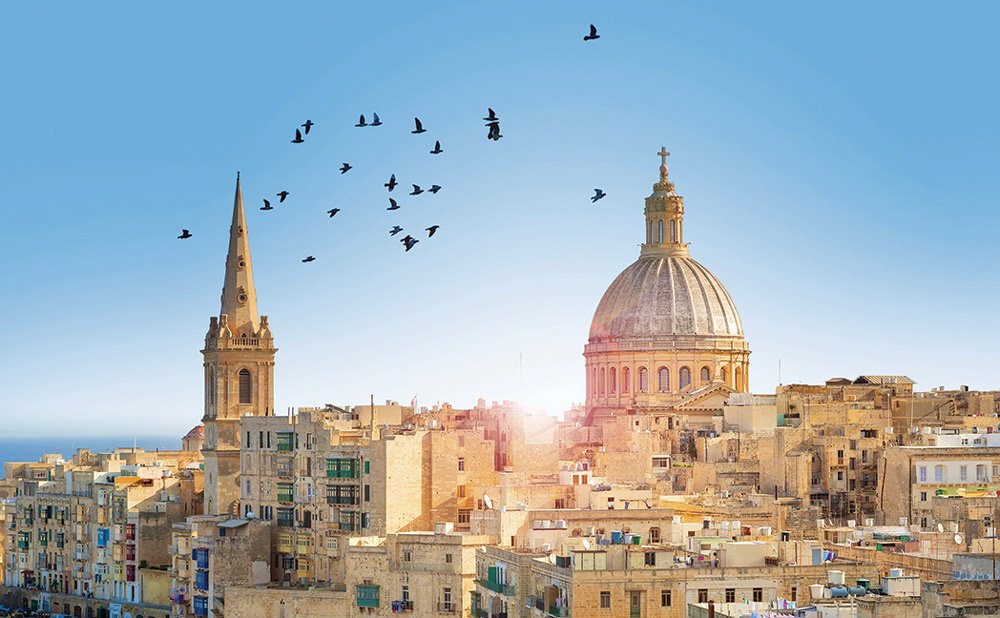 Malta is in the Mediterranean sea located at about 60 nautical miles south of Sicily. Malta is not a volcanic island but it is mostly rocky. The locals often refer to the island as the rock. Due to its rocky nature, the island does not have a lot of soil and therefore, not that much agriculture. Most of the products, as well as electrical energy, are imported from Sicily.

Coordinates of Malta and Google Maps

What is Malta famous for

Malta is a small country filled with interesting things to see. Its history is old and interesting and is now adapting to becoming a very multicultural community. Its architecture makes this place unique and worth visiting. The oldest free-standing buildings in the world are in Malta. Geologically Malta is the result of the uplift of the Sedimentary rocks between Sicily and North Africa. The dramatic landscape of the cliffs has attracted many cinematographic productions to Malta.

Malta is known for its hospitality. Indeed Historically Malta has always welcomed different nations. Integration in the Maltese society today is pretty straight forward due also to the fact that English here is a second official language which makes things much easier for foreigners and tourists. The first language in Malta is Maltese and people are proud of its own language and try to preserve it from being forgotten. The Maltese language is a mix of three different elements, the main is that of Arabic, Italian has a huge influence as well and so does English. One can notice other influences on the language such as the in the word Bongu and Bonswa which are coming from the French Language. The Maltese language is considered to be the only Semitic language written in the Latin alphabet.

The language shows the history of the island, more than being preserved, all the different nations that in the past, conquered the island, left a little influence in the language.

Malta attracts a million tourists every year. It is famous for its climate with about 300 days of sunshine and warm sea that allows swimmers to enjoy the Maltese coasts and sunbath possibly until December. Some times even the whole year-round.

The food in Malta is of excellent quality. As you can expect, being an island, the fish was the primary survival food in history. However, the very traditional dishes would almost never have fish: Maltese Rabbit stew, Hobza biz zejt, Gbejniet, Maltese sausage and more. Many of these can be tried at the restaurant or bought at the grocery shops. The cuisine has also had a lot of influence from its history, it is a very interesting mix of Mediterranean cuisine with a taste of spiciness coming from the Arabic influence.

The 10 most famous attraction in Malta

The Dingli Cliffs are the cliffs on the southern coast of Malta. The view from these cliffs is fascinating. Great to visit at sunset to see the sun going down towards Africa.

The Three cities Birgu, Senglea and Vittoriosa are the fortified cities that are an example of the authentic life of the Maltese islands.

8. The sister island of Malta, Gozo

Gozo island being smaller and therefore much quieter than Malta is a perfect stop for those who desire a bit of relaxation being emerged in the untouched nature. Particularly beautiful is the capital of Victoria and the beaches of Gozo.

Megalithic Temples are the oldest free-standing building in the world. Even older than the Pyramids and Stonehenge are a magic stop for history lovers.

Getting a ride in a wooden boat inside the caves with the blue water of Blue Grotto, is an experience that will for long be in your mind.

The authentic fishing village of Marsaxlokk located in the south of Malta will be a great stop for a walk at a street market, enjoy the view of traditional boats and eat some good fish.

4. The sandy beaches of Malta

Malta being mostly rocky offers also a great possibility to enjoy the very characteristic sandy beaches. They are mostly located in the North of the island.

Mdina is also known as the Silent City, it is the perfect place to get emerged in medieval times. The fortified city is best to be visited early mornings or late evening and after sunset when the atmosphere is more magical.

The capital of Malta, Valletta named after its creator Jean de la Vallette, is a UNESCO Heritage fortified city. It was also displayed in the Game of Thrones which was shot all over the island.