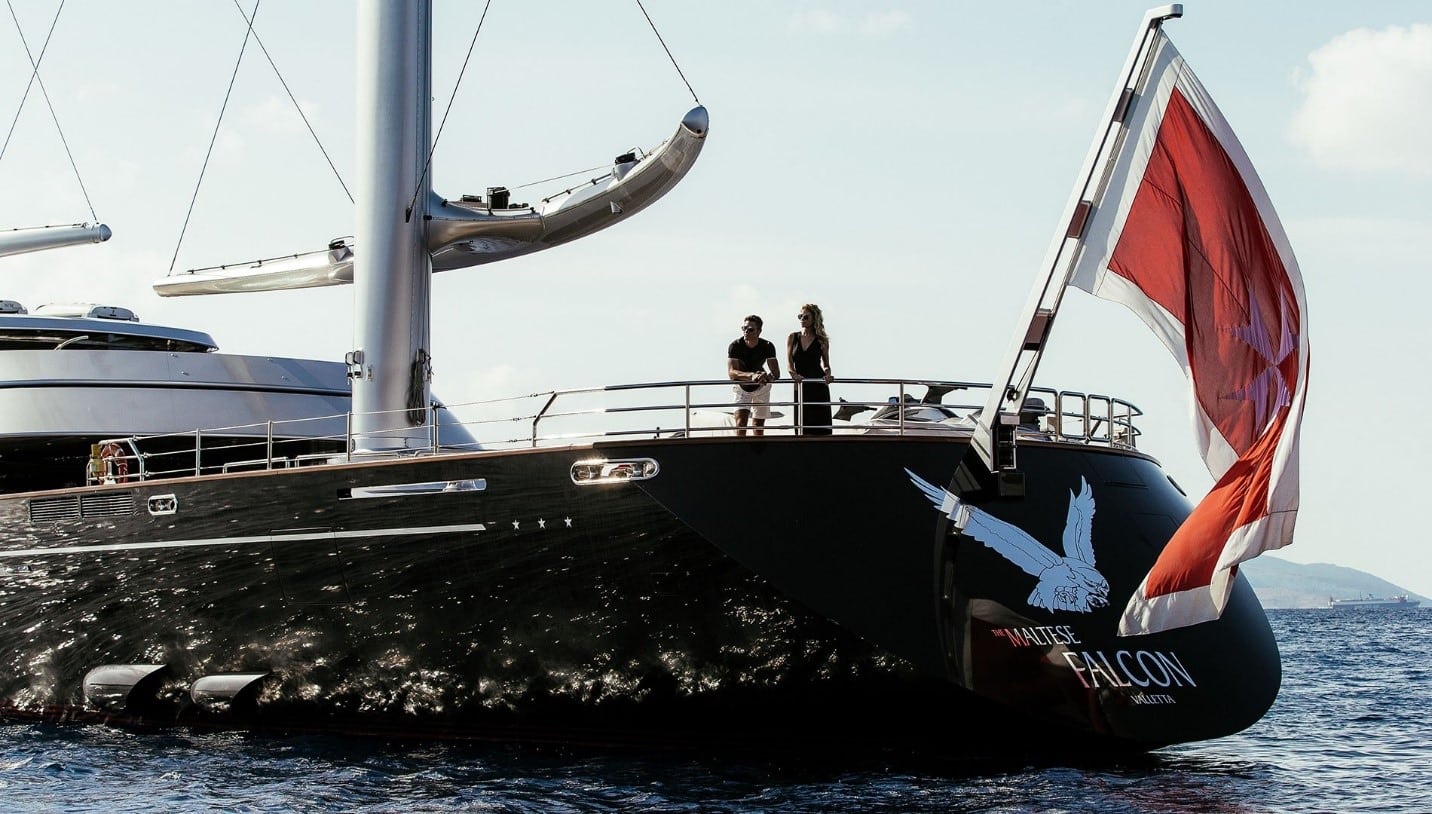 Malta boasts with one of the largest ship registries in the world. On multiple occasions, especially during the summer months, the locals get to see some of the most expensive and luxurious yachts in the world as they berth in places like Vittoriosa (Birgu) or Valletta.

These below are some of the most luxurious boats which stopped by in Maltese waters.

In 2015, the Maltese waters welcome the Serene, the world twelfth largest superyacht in the world.

This incredible piece of marine beauty, made in 2011, is a staggering 134 metres long. It got its incredible style from the Italians, of course. It was in fact created in the Italian shipyard of Fincantieri. This particular model was designed by Espen Oeino with interior design by Reymond Langton Design.

It has over 2,700 square metres of the living interior with the ability to sleep 24 people inside. There are 15 staterooms which include a master suite, twin cabin, 10 double cabins and VIP stateroom.

With the possibility of having 52 crew members on board, this enormous vessel includes an on-deck gym, tender garage, seawater swimming pool, two helipads, a lift, cinema and a submarine hangar.

The Serene was built for Russian vodka tycoon Yuri Shefler for $330 million. It has been reported that in 2015, a Saudi Prince bought it for $500 million while on holiday in the South of France. 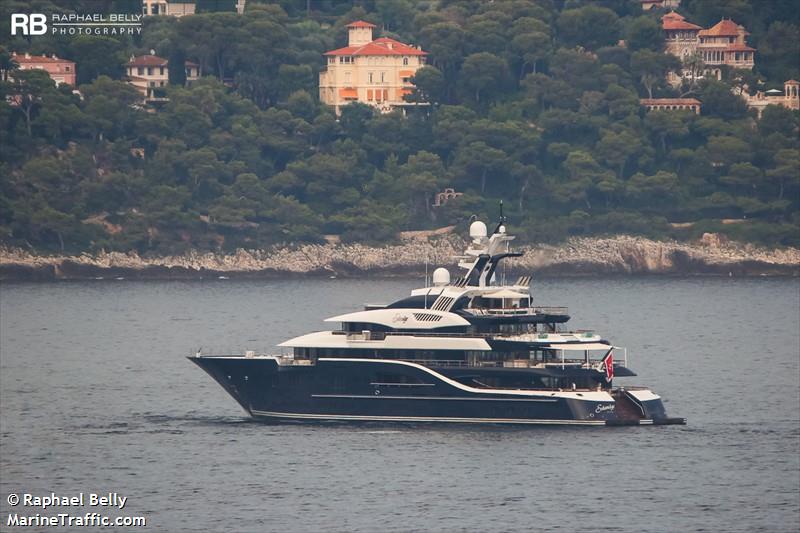 This stunning 81.5-metre long superyacht was launched in 2013 by the Lurssen’s Rendsburg yard. The Solandge can host up to 12 guests in eight cabins. 29 crew members can work here in one go in its’ 15 cabins. It has a unique interior, the boat being designed by Aileen Rodriguez combining a classical touch with the traditional rare materials.

The interior included 33 types of exotic wood, stone selections of 49 different kinds among other luxury materials.

This model is renowned also for its’ speed, having the ability to reach an incredible 12 knots cruising speed, reaching a maximum of 18 knots making it fast, elegant and practical at the same time.

It has been reported that this boat will take you back some $165 million. 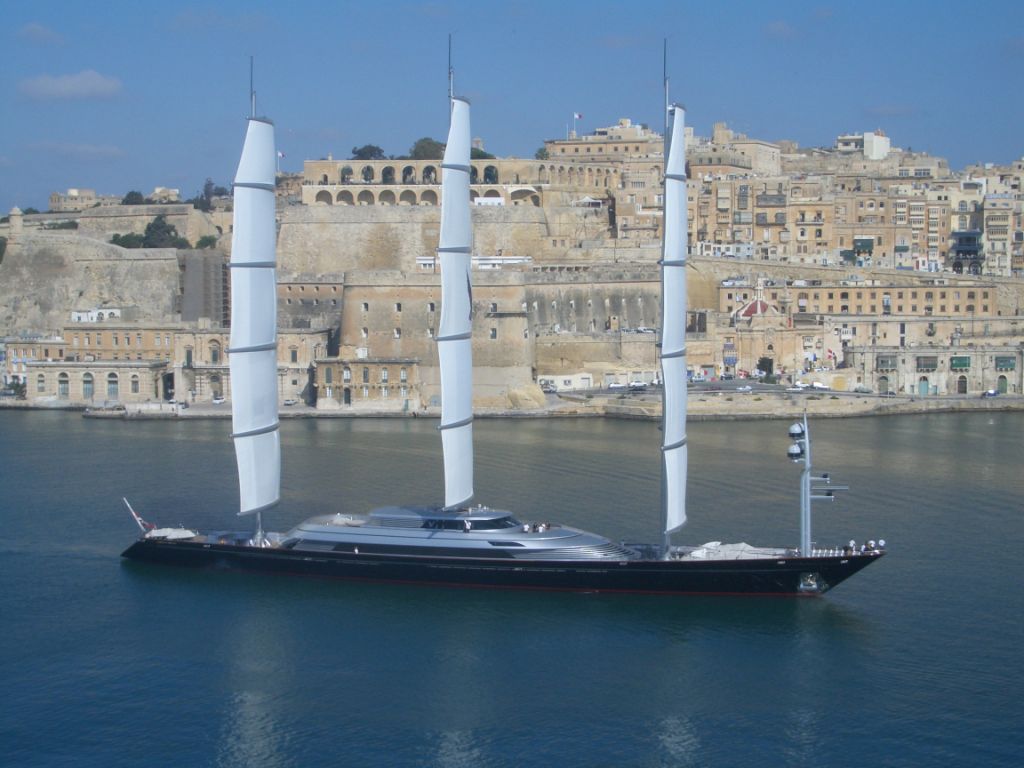 Before we dwell into this masterpiece, one might want to note that the Maltese Falcon is the title of a very famous film noir of the 1940s. (You might want to add that to your watchlist).

It is only apt and proper that we include this vessel in the list of luxurious yachts that visited Malta.

This yacht was also created in Italy, at the Perini Navi shipyard, to be exact. It was built in 2006 and at the time, it brought shockwaves among the yachting enthusiasts because of its revolutionary sailing system, dubbed the “Falcon Rig”.

It’s an 88-metre long yacht that has six luxurious double cabins with the ability to host 12 guests. It also includes one master suite and two designated VIP rooms. The Falcon visited Malta in 2009 and pulled-over for a stop at the Grand Harbour in Valletta.

This yacht was the first commissioner for American businessman Tom Perkins. He never specified for how much it was bought, simply saying it cost more than $150 million but less than $300 million. 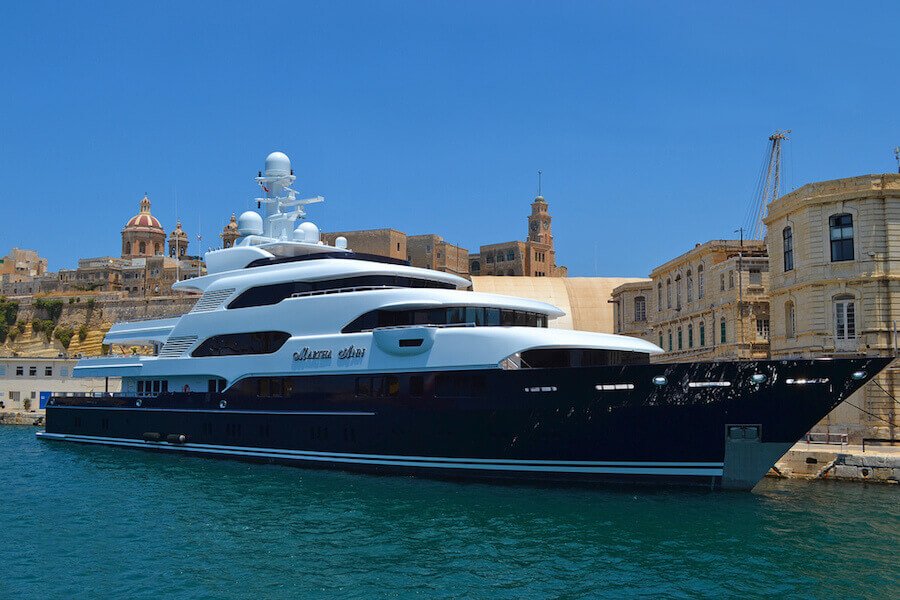 One rich owner had ordered the manufacturing of three yachts; Saint Nicholas, Titania and Martha Anna. The latter had visited Malta not too long ago and it turned some heads on its way in.

This superyacht was also designed by Espen Oenio and has a bit of everything to entertain and make its’ guests relax. Its’ 70 metres long and can host up to 12 people in its six luxurious staterooms, also including a full master cabin and a VIP suite.

Four double cabins can host 20 crew members who are tasked with making the owner’s trip as comfortable as possible. The deck includes a full range of facilities including Jacuzzi, gym and a lift.

The Martha Ann is elegant but also fast as it can reach an impressive 15.5 knots.

At the latest Monaco Yacht show, this yacht was listed at $79 million, a little bit cheaper from its’ original $100 million. 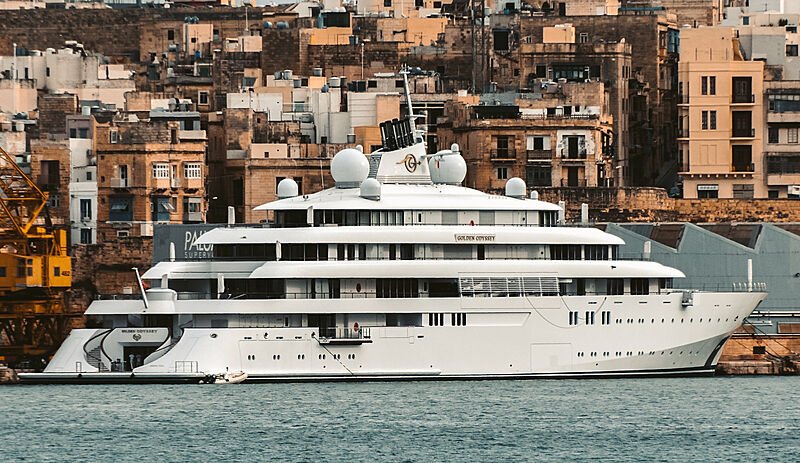 This is the most recent of world superyachts to visit Malta. The Golden Odyssey was roaming around Maltese waters only recently in July 2020. It is 123 metres long, built by Lurssen shipyard and is currently owned by Prince Khaled bin Sultan bin Abdul Azziz, the former deputy minister of defence for Saudi Arabia.

The luxury of this vessel is impressive. It includes a swimming pool, spa, beach club, gym and an elevator. A helipad also sits comfortably on one of its decks. Nothing much else is known about this yacht.

This beauty comes with a jaw-dropping price tag of $400 million. The prince owns seven similar luxury yachts. They called, for good reason, the Golden Fleet. Some of these yachts are also apparently used for research purposes.